Notice: Only variables should be passed by reference in /home/wetwolf/public_html/wp-content/themes/gameplan/option-tree/ot-loader.php on line 326
 The Four Letter "F" word! - Wet Wolf Training

The one thing that perplexes me more than anything is how some people get whipped, thrashed and beaten to a pulp. Not by a mugger in a back alley, but by food; every single minute of every single day.

I had a woman I trained several years ago. She earned her undergrad from Miami of Ohio University and her MBA from Northwestern. She held an executive level position at a major wireless provider corporation. Academically and professionally she had some noteworthy accomplishments however something was able to pummel this woman every hour of every day. No it wasn’t her boss, a parent or even her spouse. Rather it was something very minor and unsuspecting. In fact she should have charged it rent for all the time it occupied in her head.

Get your mind out of the gutter! It wasn’t that!

No it was far more compelling!

That’s right, it was FOOD!

I guess I’m just dumbfounded how people get put in the arm bar or full nelson not in the UFC, but by a bully they can’t seem to avoid in fact a bully they face every single day. I’ve seen food bully, control and dominate the minds of folks like nothing else. 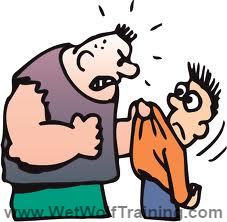 This guy is nothing compared to a cupcake, literally!

We’ve all seen the girl that always runs back to the unfaithful boyfriend like a lost puppy every time he cheats on her. Let me tell you now he has nothing on her compared to the grip food has on her! We’ve all seen the girl who can’t stop driving her credit card debt deeper into the tank because she can’t say no to the new purse and pair of jeans. Those trendy outfits have nothing on her compared to the lure food provides.  And sadly enough you may have witnessed the battered wife who can’t get up and leave her abusive husband. Well he is nothing compared to the stranglehold that food has on her!

I’m telling you now folks, I would even go so far to say that food is more powerful than even a drug addiction. Why? I’ll tell you why!

Because once you finally kick the habit to the curb you don’t have to face that drug every day of your life. I got news for you lady, food isn’t going anywhere! You better get used to it! You’re going to have to deal with it every meal of every single day! It’s like a nasty little troll trying to pry open your jaws while screaming “let me in!” Only it’s not a troll, it’s a brownie and it definitely doesn’t have to pry open your jaws as they are already opened wide and before it can scream “let me in” you have already gobbled it up! 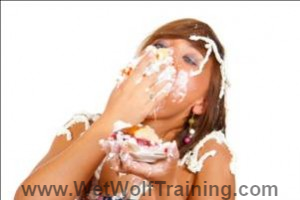 Owned by a piece of cheese cake

Oh, it doesn’t stop there. Even if you get past the whole obsession factor you still have another obstacle looming in your path.

The way I define discipline is the ability to do the right task at the right time the right way. This is paramount for anyone who wants to slay their personal body fat demons. I had a woman I trained a few years ago. She could never, for the life off her manage to eat her first meal of the day, at least not the meal I assigned to her.

Did she wake up and cook a few eggs and some quinoa? No that would actually require some discipline; instead she either threw together some other concoction or skipped it all together. When I asked her why she wouldn’t, notice I didn’t say “couldn’t”; she always thumbed her nose at the idea of cooking something when she rolled out of the sack in the morning before work.  “Oh I’m just not good with stuff in the morning, I can’t get it together.”

Are you kidding me! This woman was able to graduate from Vanderbilt University but couldn’t for the life of her eat breakfast!

All night study sessions? Not a problem!

Maintaining nearly a 4.0 GPA at a top university? Bring it on!

Cook a breakfast when she woke up? Bullied beyond belief!

Only an utter and total dereliction of duty could explain her inability to prepare her first meal. I mean how do you graduate from Vanderbilt University with a 3.8 GPA and still lack the wherewithal to prep a meal? Simple, She was in uncharted waters or better yet like a fish out of water when she was no longer in the in the friendly confines of academia. She may have had discipline in that environment but her habits were most definitely not contiguous as she failed miserably when it came to food.

So even if you are able display the discipline to prepare and eat your meals the question still remains: Can you sustain?

Here is where the problem starts: The girl starts messing up once a day every day, then twice a day every day. In her mind 1 or 2 x a day isn’t bad. But over the course of the week that’s 14 unapproved meals per week. That’s fudge(ing) awful. She then gets frustrated because she only lost one pound of fat and decided that a single pound of fat loss over a month of eating unapproved foods every single day just wasn’t good enough for her and ditched the plan all together. Then three months later she is twelve pounds heavier with less muscle and feels like that chicken pot pie she just gobbled up.  She has NO ability to Sustain.

If this sounds like you then don’t despair because you are not alone. It may seem like you are alone when that ooey gooey slice of cheesecake has you cornered in the back of your kitchen but always remember that the best way to beat a bully is to stand up to it. Just no biting.