Notice: Only variables should be passed by reference in /home/wetwolf/public_html/wp-content/themes/gameplan/option-tree/ot-loader.php on line 326
 Just Because You're Fat Doesn't Mean You're Lazy! - Wet Wolf Training

Obese women are not lazy.

Now before I go any further let me be perfectly clear.

I’m not talking about a couch potato who eats garbage.

I’m talking about those big bodied women who have the heart of a champion and bust their butts in the gym on a daily basis.

We’ve all seen them drenched in sweat in the spinning class, huffing and puffing on the stair-master or panting like a blood hound on the treadmill.

I can see the burning passion in their eyes as they push forward with each step being a struggle.

I know this much, if there’s one thing these women are not, it’s lazy!

“So why can’t they lose weight?”

Typically a regular person can just eat twigs & berries and hit up spinning classes and still see moderate weight-loss changes in the short term. Of course they’ll re-bound and gain it all back later but at least they can move the needle, albeit temporarily.

However their obese counterparts have so many hormonal & genetic factors working against them, that it renders exercise nearly obsolete in the weight loss game.

Chronically obese or at least moderately over weight folks usually fall under the somatotype category of endomorph.

For a female who is a pure endomorph, you can expect to be genetically predisposed to higher body-fat & estrogen levels.

This results in a higher body-fat “set point”.

As a female, your body-fat set point is the lowest body fat percentage she can comfortable & safely maintain.

A key indicator that a females body fat has dropped too low is when she loses her monthly cycle.

I trained a women who was a moderate (but not pure) endomorph and her period stopped when she hit 23% body fat. The lowest she was able to drop her body fat down to for her figure show was 15%.

The good news is that having a high body-fat set point for an endomorph is that if you have a solid foundation of muscle you can look very good in a bikini in the mid to upper 20’s body fat range. (see Treacey further down below)

Now things can get really difficult when you’re an endomorph suffering from hypothyroidism, diabetes or ulcerative colitis.

Coercing off your stubborn adipose can be like trying to climb a cactus.

Believe me. The only way in the world you’re gonna have sustained success is if you follow the right nutritional map.

This isn’t up for debate. It’s mandatory.

Take a look at LeighAnn 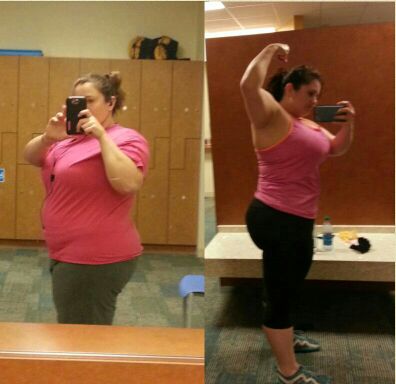 She quit wasting her money on these pyramid scheme diet shakes and started packing her meals from her customized nutrition program!

Six months and 40 pounds later she was staying strong and sustaining her fat loss after leaving the 2 hour gym sessions in the dust.

Look, I won't lie, If you find yourself up against some of those challenges then burning body fat can be like trying to climb a cactus.

Even with a momentous effort in the gym.

Tracey knew this all too well. 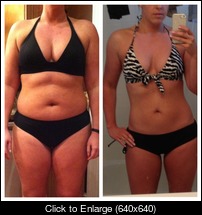 Tracey is a physical therapist and works with athletes day in and day out. She was no stranger to hard work in the gym but her genetics and 40% body fat had a strangle hold on her progress.

Until she started putting the right food into her mouth.

One year and 31 pounds of body-fat burned later, she was nearly unrecognizable.

This may come as a shock to you, but your progress isn't going to wait until the 365th day to show up.

Besides, the year is going to pass anyway, so wouldn't you rather be 30 or even 50 lbs less when it comes full circle?

"Not so fast! I have hypothyroidism, diabetes and fibromyalgia! Nothing has worked for me!!"

Nothing except your very own customized nutrition program.

Come to think of it, you sound eerily familiar to Bonnie. 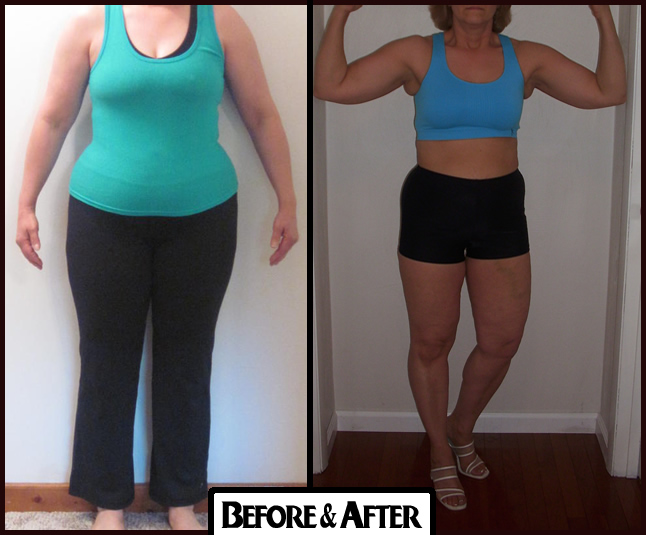 A mom and granny, she simply followed one of my home based exercise programs for 3, thirty-minute sessions each week in addition to her customized eating program and lost whopping 13" from her waist!

That's over a foot decrease in girth!

"Bu bu but I want to do a bikini show! Can I still get lean enough for that?"

Not only can you do it but you can do it safely and methodically one meal at a time.

Take a look at Candice below, who has to take daily medication and monthly blood work for her hashimoto's thyroiditis. 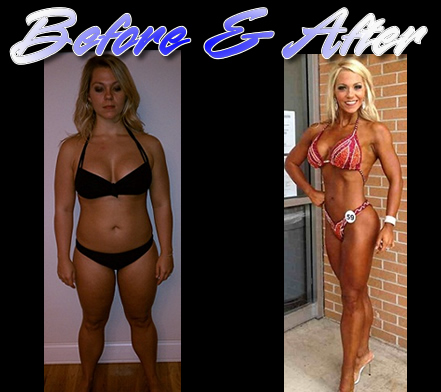 She lost 41 lbs of body fat over the course of a year and stepped on stage to showcase her leanest figure of her life!

If there's two constants in each one of the transformations above it's food & time.

And a lot of both.

And that's why for pure endomorphs the reason they can't drop weight even by working their ass off in the gym is the easiest question I've answered all year.

They require their very own customized nutrition plan based off their food prefs, age, size, activity level and a number of other factors.

And busting your butt in the gym definitely won't work.

Or how much time you spend in the gym!