Notice: Only variables should be passed by reference in /home/wetwolf/public_html/wp-content/themes/gameplan/option-tree/ot-loader.php on line 326
 High Cravings, No Appetite with a Chance of Hunger - Wet Wolf Training

High Cravings, No Appetite with a Chance of Hunger

Many folks don’t know the difference between hunger, cravings and appetite even though they grapple with them every day. Understanding how they work is vital to implementing the right nutritional program to manage and control them.  Watch as I dissect all three and identify the likely culprits so you

Factors that determine your blood sugar level (relative to food & water alone) are number of calories, macronutrient profile of food, hydration level and amount of fiber.

Your appetite is your desire to eat and is influenced by your metabolism. Let me be very clear on this next point; if burning body fat is your goal you want to increase your metabolism the safest most effective way possible. And you do that by eating more healthy food which will directly stimulate your appetite.

That’s why people with a fast metabolism are able to eat so much. It’s because they have a healthy, strong appetite. They’re able to comfortably eat frequent moderate to large sized portions of healthy meals every 2-3 hours during the day .

You’ve all known the person who swears they’re never hungry and can’t eat when they wake up in the morning, even despite eating twigs & berries the previous day. In fact this might even describe you. This is a good example of someone who has actually suppressed their metabolism through under-eating in hopes of weight loss through caloric restriction and is on the verge of metabolic damage, if not already knee-deep in it.

Appetite suppression is very common amongst chronic dieters, calorie counters and even fitness fanatics who have fallen for the protein bar & protein shake craze.

Cravings are the most complicated one of all because so many different factors outside of physical needs can still influence your cravings for food.

For the most part, cravings stem from two different types of deficiencies.

1) Deficient in a certain macro or micro-nutrient. For example, if someone is low in magnesium their body will signal cravings for a certain food that is mag rich. If you eat a diet very low in carbs, it’s very normal to crave them, even despite having maintenance levels kcals.

2) Emotionally deficient. You’re unfulfilled in other areas of your life. You hate your job, your kid is having trouble at school, your relationship is on the rocks, you lacked a father figure during your early child hood-teenage years, you are lonely, you aren’t getting attention from your husband, you hate your mother-in-law, your boy friend cheated on you and the list goes on and on.

The emotional aspect is the most common result of cravings.

A blazing red-flag that you are emotionally unfulfilled in life is when you have a desire to eat (usually sweets or nuts) when you aren’t even hungry.

Things get tricky though when you get to cravings. 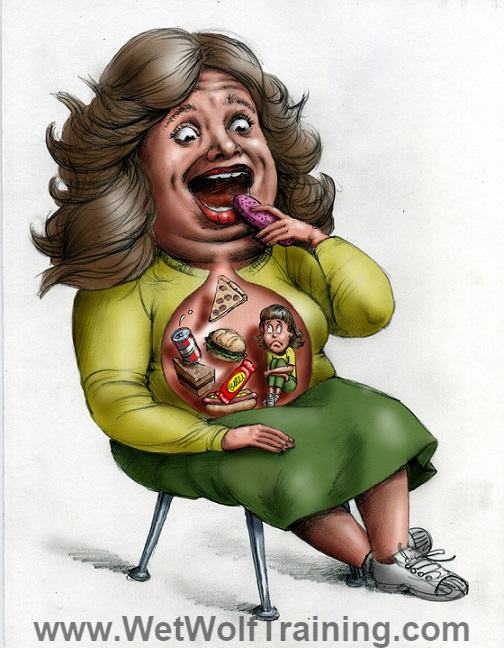 Out of control cravings and hunger eventually lead to binge eating.

This is why you have people who dive into a jail break binge of ice cream and cookies and still continue to stuff their face – even after they’ve already devoured half a gallon.  They’re so emotionally unfulfilled that it’s no longer an issue of fulfilling macro-nutrient needs, it’s a psychological one.

Another potential pitfall to be aware of is that too much exercise can spike your hunger levels and cravings.

I’ve always said that too much exercise can ruin a good nutrition program. No matter how balanced your eating is, if you overload it with spinning classes, crosfit workouts and and chronic distance running you’re going to exceed the boundaries of your customized eating plan and step into a dangerous territory of rock bottom blood sugar levels and veracious hunger and insatiable cravings.

Now imagine trying to endure all that with emotional voids lingering in your life.