Notice: Only variables should be passed by reference in /home/wetwolf/public_html/wp-content/themes/gameplan/option-tree/ot-loader.php on line 326
 Food Addictions: Don't Count Your Macros - Wet Wolf Training

Can’t seem to find a diet that works? All the macro talk leaving you confused? Your straight-shooting coach to the rescue once again, and he’s got your new diet in hand. Those seeking sugar-coated advice, look elsewhere!

In my previous installment I talked about how many aspiring figure & bikini chicks struggled with sticking to their program. It doesn’t matter if its an off season eating pattern or contest prep, some girls simply don’t like to be told how much to eat if it doesn’t allow them room for that deep dish pizza and hot fudge brownie with a scoop of runny ice cream on top covered in warm chocolate syrup! 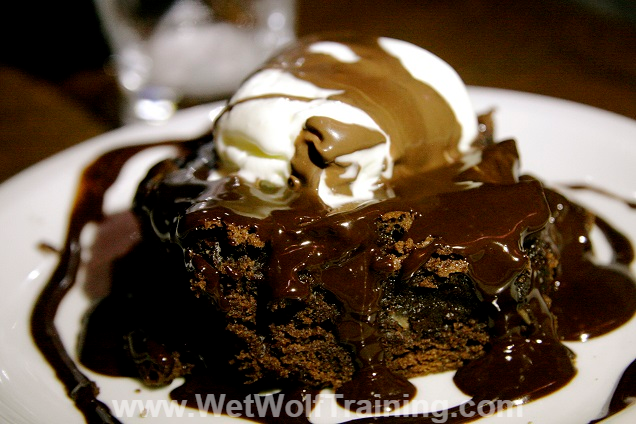 You won’t have room for this will all the healthy food you’re about to eat.

Following your program will require you to drop your weekly ice cream treat.

I get it. To say it’s a challenge for you is an understatement. And no, you can’t trade an extra hour on the treadmill for the right to eat at your favorite stuffed burrito at Chipolte.
This isn’t about women’s rights or not being sensitive to those with an eating disorder.

After my last article on food addictions I must have gotten over twenty private messages of girls asking me the following. “Hi, I’m 32% body fat and weigh 155 pounds. What macro numbers should I follow?”

NewsFlash! You shouldn’t be counting macros or calories. You need to have faith in your program and then do what it says.

Do you really think having 74 grams of carbohydrates one day instead of 66 grams is going to be the culprit of you not being able to lose additional 35 pounds of adipose tissue? C’mon folks.

Well why did so many people ask me that question? Why do so many folks say they eat healthy foods and then complain “I can’t lose any weight!”

I’ll tell you why, because you’re not really eating healthy. Your diet is loaded with processed, refined foods, supplements & dairy products. In fact here’s what someone just posted today on my facebook wall:

See what I mean? This foppish broad has actually convinced herself that greek yogurt, protein powder & protein bars are part of a healthy fat loss diet. She boasts about going to the gym 8 x week because she “just loves it”. Sorry sassy pants but you’re not fooling me. The real reason she goes to the gym so much is to compensate for her underachieving diet but unbeknownst to her only exacerbates the problem.

I can hear the tirade now, “Your articles are no help whatsoever and your figure it out yourself attitude sucks. So I just won’t read anything you write or post…problem solved!”

Sheesh! Some thanks I get. I suppose next time I should write out personalized eating pattern’s for everyone who asks. Tally up their individual macro numbers and send them on their way to the body of their dreams.

While I’m at it would you like me to throw in my American Express card info, social security number, and PIN number as well?

Look here sweet cheeks. The reason a one size fits all cookie cutter program for a formula, percentage or ratios based off of an individual’s body weight is not necessary and usually won’t work is because everyone is different.

Throw out some random numbers for an antsy girl who has never followed any sort of a consistent weight training or contest prep protocol before and the answer is simple: it won’t work.

Forget about the individual’s height, weight, lbm or body fat%, that’s just the tip of the iceberg. In order to design a personalized eating pattern with the best possible chance of success to reaching contest ready conditioning, the following factors would need to be considered:

Then once the eating pattern is implemented the individual still has to follow it.

Still though, why do so many girls who are light years away from ever seeing the bottom of their belly button think they need some meticulous diet with fifteen different herbals, extracts and supplements attached?

This is a simple question but with a complex answer. I think I might be on to something though.

We had the usual one minute greeting segment in church last Sunday where you stand and greet those seated around you with a brief “good morning” and a hand shake. Every once and a while some overzealous baby boomer with not enough on his or her mental plate will commence in a full on interrogation with me cued by the handshake.

As was the case last Sunday.

I turn around behind me to meet an older couple in their sixties. After the routine greeting the obese wife proceeds to interrogate me as if I was on a first time job interview, “So what do you do?” she asks. I give her the shortest answer possible. She then follows up with, “Where did you get your training?”

What do you mean?

“Where did you get your education?” her husband chimes in.

Would you like me to fax you my resume? I reply with a grin.

The next hymn started up and I turned back around to face the front. All of a sudden the woman leaned forward to whisper in my ear “I’m a nutritionist.”

At that moment I almost stumbled over the pew and fell off the balcony waiting for a host of angels to swoop down from heaven above and rescue me from certain disaster.

Regaining consciousness I snapped back to reality. She didn’t just say what I think she did, did she?

You see this is just part of the bigger picture. Any time you have obese women speaking as an authority figure to the masses on the topic of nutrition it subconsciously gives the advice seeking female “permission” to be as fat as their adviser. See my point?

The driving force behind all these women pleading for a brand new diet with specific macro numbers is because they really believe that’s all they’re missing.

You’d never guess it but simply asking most women to make smart eating choices and sticking to a sensible diet on their own is like asking a high school dropout to perform brain surgery. It’s disastrous. A female with over 25% body fat demanding the specific number of grams of protein she needs to eat over a twenty-four hour period is insane.

Let me break it down a step further. A female over 25% body fat asking for exact gram amounts of her macros per day is akin to a girl who has never lifted weights before asking to be put on steroids. Get the picture?

Give a newbie a diet with set macros and she won’t even get past the first day. Somewhere between getting the tomato’s out of the fridge and weighing the slice of raw salmon she lost focus and scarfed down a handful or hickory roasted cashew nuts.

The last reason women think they need some special diet designed just for them to get them near the 20% body fat neighborhood is because on every channel, every magazine cover and every billboard there is a new fad diet. The holy grail of fat loss is just a phone call away.

This mindset leaves the naïve newbie chewing on her cinnamon raisin bagel, perplexed and confused as she ponders weather to try the Crunch diet or West Palm Beach diet- next month of course.

Surely nothing as simple as losing fat could be as easy as simply making smart eating choices and exercising? Could it?

The following workout and diet is for any female who is above 25% body fat, or in that neighborhood. That’s about 95% of the readers and lurkers here would fall into that demographic.

Ground Rules for Beating Your Addiction to Food 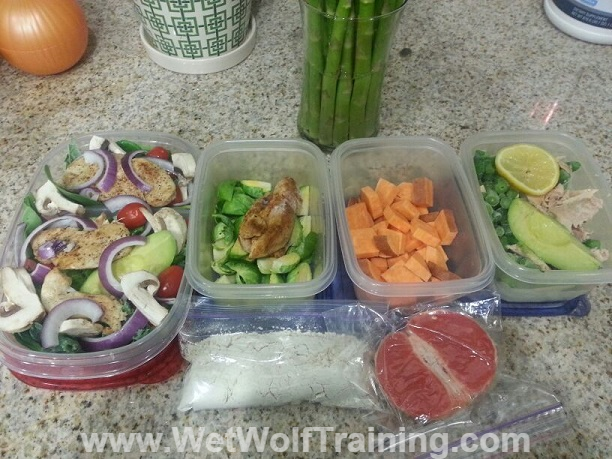 Here’s what it’s not. A large fully loaded pizza. A bottle of wine with a couple slices of cheese cake. A half gallon of ice cream. This isn’t a filthy garbage binge meal to fill a void in your life but rather to provide a break in your eating so you can live your life! 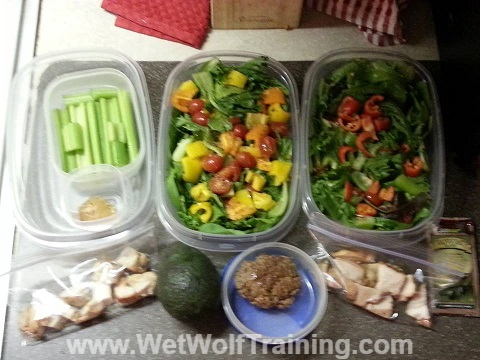 When you eat plenty of healthy food you can thwart your food addictions instead of caving into them.

What about a protein shake you ask? The only time a whey protein shake should be consumed on this plan is during or post workout and you are allowed to have a grapefruit along with it. It will also count as one of your meals.

“Wait a minute! You said a shake could replace at least one solid food meal per day.”

I said a shake, not a whey-protein shake. There’s a big difference between a shake using a multi-species protein powder mixed with berries and a healthy fat source and a scoop of when mixed with water.

“Yea but can I have some soy sauce on some of that?” Condiments, sweeteners and spices are fine but use no more then a table spoon three times a day.

Do not ask me if you can have a food that is not listed on that list. That is the first problem with the 25% body fat and above female demographic. They immediately start to look for a way out. Ever heard the ole’ saying “Give em’ and inch and they will take a mile?”

This plan might be a little inconvenient and it certainly won’t allow for you daily high fructose corn syrup fix but if you stick to it you’ll graduate from the 25% body fat club.

Most likely ahead of schedule and with honors.