Notice: Only variables should be passed by reference in /home/wetwolf/public_html/wp-content/themes/gameplan/option-tree/ot-loader.php on line 326
 How To Count and Figure Out Your Macros

How To Count and Figure Out Your Macros

Back in 2004, I trained a young lady who just couldn’t seem to get the whole diet thing down. After two years of working with me, she vowed to finally buckle down and stick to her diet — for the fifteenth time.

The next day, she waddles into the gym with five different sheets in her hands. Each one was a different eating pattern that I’d given her over the past two years.

“So, when do I have the salmon?” she asks as she hands me the first sheet.

“Now, when do I take the flax oil caps?” handing me a second.

“And what about the protein shake?” poking another eating pattern in my face.

Confused and tormented, I stood there, finally realizing why this nutritional derelict’s body weight had more ups and downs than a Six Flags roller-coaster.

And I’m not talking about a moderate five or ten pound jump here. I’m talking about twenty to thirty pound swings that had her tippin’ the scale like a heavyweight prize fighter.

“Well, which eating pattern are you following?” I replied.

Glassy-eyed, she just stood there with a flummoxed look plastered on her face.

“You need to pick just one of the programs to follow, not all five.”

And so the roller coaster ride continued.

A big mistake people make is trying to count their macros. All it’s gonna do is just confuse persnickety eaters even more and despite those handy apps the IIFYM posse uses to tally up their macro grams off estimated charts, different brands of finger foods, restaurants and at the end of the day can still be off by a couple dozen macros.

Besides you won’t need to count your macros if you measure and weigh your food in the first place. A smart well designed customized diet plan should always have the exact amount & specific types of food listed for every single meal or every day of the week. You don’t need to be counting grams of protein, carbohydrates, or fat and, least of all, calories. 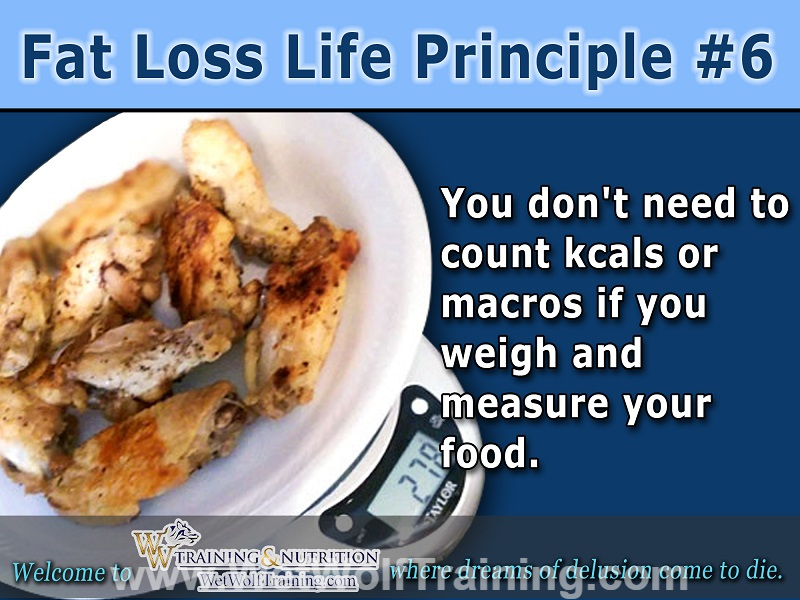 You don’t need to count macros on your diet plan as long as you measure & weigh your food.

All you need to do is measure and weight your food.

I get dozens of girls a day asking me how many carbs to eat per week, per day, per meal post workout or for fat loss and I tell all of them the exact same thing:

You should never count your macros because it removes the type of food from the equation and shifts your focus to the macronutrient value instead. So you sit confused  as you attempt to dibble dabble & tinker toy with some arbitrary macro percentages.

Look You need the right map, you need a plan. Stop trying to flounder around on your trying to tally up how many grams of carbs to eat on your cardio days based off what some bikini chick on Instagram claims she does.

Even if you stick to standard portion sizes of the right foods, you’re still going to lose fat and keep a steady stream of nutrients feeding your muscles. Quite honestly, it’s hard to go wrong when you eat a diet of natural, healthy balanced nutrition.

Do you really think that if your diet is 40% protein instead of 35% it’ll result in your demise?

Do you really think that the culprit of your 28% body fat is eating 97.5g of carbs instead of 90g?

Look here, blueberry! The next 160-pound, 26% body fat carb-a-holic who tells me that she feels awful, or that the brain can’t function without 200 grams of carbohydrates per day, is just asking for a big bowl of mashed potatoes stuffed down her throat.

Or even worse, the carb-a-phobe who swears she will blow up to the size of the GoodYear blimp is she eats over 22g of carbs a day.

There’s no reason a female can’t function just fine on less than 100 grams of carbohydrates per day, especially on a general, healthy diet as long as all the other factors are in place.

First of all, it’s usually smart if a low carbohydrate day is utilized on a day where there’s no weight training. Second of all, if you don’t raise your protein and fat intake on days that you really drop the carbohydrates, then you’re going to feel like you’re doing time at concentration camp.

Really, though, this should be common sense. If you’re going to drop your carbs faster than the stock market in late 2008, then you’re going to need to let the protein and fats pick up the slack.

Just for you ladies, I’m going to take things one step further and give out a general template on how I assign macro pairings for different females.

In the “Food Addictions: Don’t Count Macros” article, I didn’t mention anything about the order of pairing up macros. The most important thing was that you just made the right choices. But now I’ll introduce different macro combinations that are better suited for the many unique types of females that frequent these here parts.

First, let’s take a look at what a standard placement looks like for those eating six meals per day:

Don’t worry; it’s fine to have carbohydrates that late in the day. You won’t blow up like the Goodyear blimp. Carbohydrates should be placed around the weight training session regardless of where it falls in the day.

Macro meals for the Fat Girl with Muscle

First up, we have the fat girl with muscle. This includes any female who’s close to 30% body fat with a solid foundation of muscle beneath the padding. 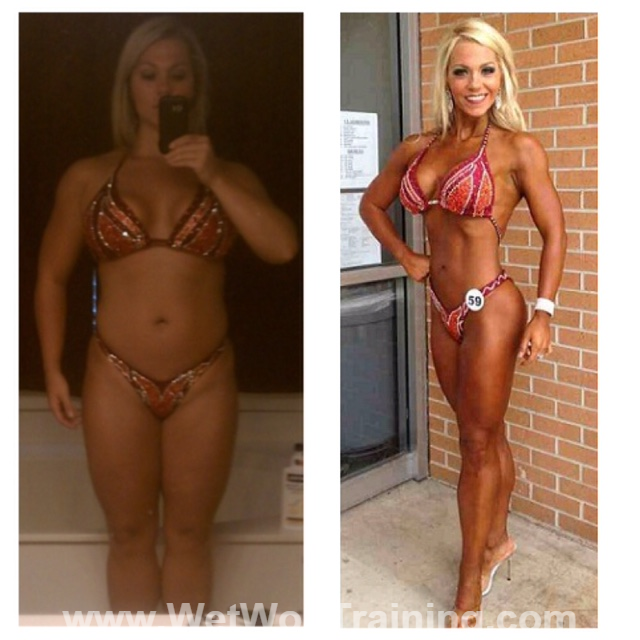 Fewer carbs but more fats for the Endomorph

The key to making it work is to add in a leafy salad or vegetable source at every protein and fat meal.

Obviously, on weight lifting days, a carbohydrate meal could be placed post-workout.

Macro Pairings for the Skinny-Fat Girl

Next on the run down, we have the skinny-fat girl. This type of girl is very common. She doesn’t have much experience weight lifting and views cardio as the cornerstone of her training. She’s thin in appearance, but carries a moderate to high body fat. She has no appreciable muscle or myogenic tone to speak of.

For the skinny-fat girl, she’ll do well on a very balanced macronutrient pairing eating pattern: 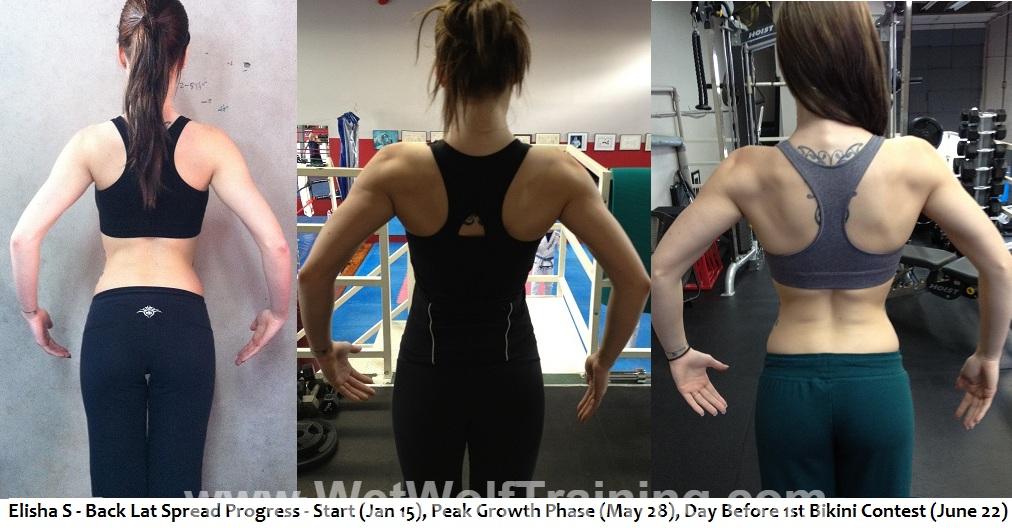 Some may be wondering (and a little worried) about meals that contain protein, carbohydrates, and fats. And that’s actually a very valid concern. In the case when you might eat some almonds as a fat source along with your protein, it’d be okay even though there are trace amounts of carbs in the almonds. A good rule of thumb is to keep trace macros (those not emphasized in the meal pairing) under five grams per meal.

Another good example is having one egg yolk mixed in with egg whites and some oats. The one yolk would contain trace fats, but it’d still be okay to have within the protein and carb pairing.

Macro Pairings for the Skinny-Lean Girl

Last on the list is the skinny-lean girl. She might be moderately lean, or she might be ripped. Either way, she has a difficult time gaining any type of weight.

Heck, this girl could drop three pounds just by walking from her car into the gym.

She needs a constant flow of anabolic nutrients into her system to steer off the catabolic affects of her metabolism.

Something along the lines of:

Now the remarkable thing about this type of body type is that if she actually reduces her exercise, trains smart and increases her food intake along with overall macro quality, she can actually burn off body fat while eating more kcals and doing less cardio.  Take a look at the photo above as a good example.

Match Your Macros, Maximize Your Roughage

If you’re a skinny-fat girl who limits your carbohydrates on occasion, then prioritize your first meal as the most carbohydrate-rich meal. The second most important meal would be your post-workout meal.

Also, make sure every single protein and fat meal is very rich in leafy, fibrous vegetables. Many vegetables are thermogenic, meaning they can actually speed up your metabolism. Other foods, such as celery, are actually negative-calorie foods in that they require more energy to digest than they contain.

Unless you eat more carrots than Bugs Bunny, the insulin response of leafy, fibrous vegetables is practically non-existent. And if you cant get in your garden food you can toss in a couple spoonfuls of this micro-nutrient rich stuff to forfeit all that chewing.

Lastly, when adding a thick roughage of leafy, multi-colored thermogenic foods on top of a fat and a protein meal, the satiety factor can be very profound.

Why the Body Type Classifications?

The reason I put my personal stamp on the body types was because you can change your body type, but you can’t change your somatotype!

Whether or not an endomorph who’s a fat girl with muscle gets ripped, she’ll still be an endomorph. 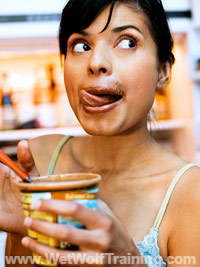 In my humble pie opinion, I didn’t want to base the subject’s current condition on such finite factors such as bone structure. Unlike muscle and fat mass, the overall dimensions of a person’s bone structure don’t change.

Feed Me Your Diet Feedback

Now that you girls have a better understanding of how things stack up in the macros game, I want to hear about your better energy levels, improved recovery, and faster fat loss.