Notice: Only variables should be passed by reference in /home/wetwolf/public_html/wp-content/themes/gameplan/option-tree/ot-loader.php on line 326
 Don't Blame Your Diet on Mom - Wet Wolf Training

Don’t Blame Your Diet on Mom

Yesterday at the gym I noticed something all too common. It was something I’d seen a million times before, only it hadn’t actually happened yet, I could see exactly what was about to unfold.

A plump, 40- something woman was standing in front of the scale at the gym. It’s one of those digital scales where you push a button then wait for the go-ahead then step on and it spits out your weight a couple seconds later. And for many folks those 2 seconds can feel like an eternity.

The scale is located out in the open next to those cubby hole shelves where you can put your belongings while you do your hour long stair master session or walking lunges up and down the hallway.

So I’m tucking my bag onto one of the shelves when I notice the woman standing in front of the scale peering at it with a hopeless look on her face. She does this every day (at least every day I see her) So I stand back out of her peripheral vision so I can witness how this dysfunctional encounter unfolds.

She finally steps on the scale and the dreaded two second count down begins head drooped down eyes locked onto the digital readout, just peering down at the number that lay right below her eyes. She did not budge an inch, frozen in place she remained, almost like a form a rebellion as if trying to “will” the number on the scale to drop.

As fate may have it the number didn’t drop ……until she hopped off the scale and like the million times before the scale always wins in the end.

I’ll tell you exactly why, but first you must understand the woman.

We’ve all seen them before. If they took roll call at the gym they’d all get a gold star for attendance. The obese woman who teaches aerobics class. Or maybe she runs marathons. OR maybe she’s a personal trainer or a tough mudder fanatic. 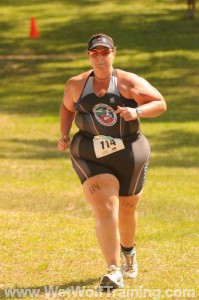 Not 25% body fat, not a little curvy and not in “off-season”. I’m talking about the workout fanatic who’s crossed the border of obesity and is deep behind enemy lines.

I’ve seen my share of women like that over the years and if there is one thing they always have it’s a great work ethic. Don’t let that abundance of adipose fool you! These women have the heart of a warrior when it comes to giving effort in a Saturday morning group class filled with other like minded women they will let out a full scale calorie burning assault with their empty stomach and caffeine surging through their veins like a stalwart!

Some of them even lead classes twice a day, down low-carb yogurt cups and skinny cow frozen treats, pound out their own tricep and shoulder routines then slam a herbalife shake.

So lack of effort or desire certainly isn’t the culprit for their tree trunk triceps and ham hock biceps.

The really confusing thing about these women is that they speak with such authority on the topic of weight loss. Yet week after week, month after month, year after year not a single speck of success do they have to show for all those countless hours spent sweating to the oldies. 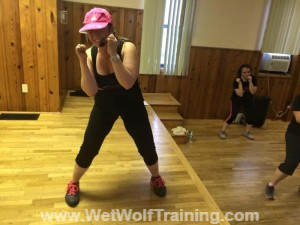 “Killing it” in the gym is also killing your diet.

“You judgmental jerk! How dare you insult these devout ladies! What do you want them to do? Quit?”

I don’t want them to quit.

I want them to change.

Because what ever they’re doing clearly isn’t working. 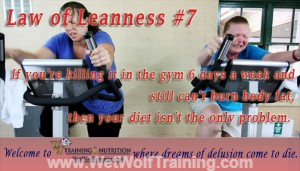 If you’re killing it in the gym 6 days a week, then your diet isn’t the only problem.

They blame it on their ex, their thyroid or their last pregnancy. But never their diet and certainly not their chronic exercise addiction. Which brings us to my Law of Leanness #7. IF you’re killing it in the gym 6 days a week and still can’t make progress, you’re diet isn’t the only problem.

Chances are your training is also the likely culprit. Make no mistake about it, you can over-eat a good training program but you can also over-train a good diet. Not that these folks are following a good diet by any means but they aren’t even giving themselves a soft-serve ice cream cone’s chance in hell.

I remember when I was doing in-the-gym personal training, circa 2004, I was training a rotund woman who was teetering on the verge of 30% body fat and built like a bean bag chair. I’d been working with her for over a year and she had recently signed up her 14 year old daughter to start lifting.

If her daughter was destined to be a spittin’ image of her mom then she was off to a great start. Too good of a start in fact, which is why she wanted her to start hitting the gym before she scurried off to college and got ambushed by the freshman-fifteen.

I always enjoyed working with young pups more because their attitudes were pliable. Their beliefs could still be molded like balls of clay. They hadn’t “thrown-in” the proverbial towel in the game of fitness yet.

You see, they weren’t as despondent as the crop of middle-aged women like her mom who had already conceded their fate in the fat loss game. We all know the type, in fact some of you reading this might even be that type. Sure, you do exercise classes, you hit the gym, you might even follow “clean eating” and do the whole protein shake thing. But deep down you’ve conceded your lot and you’ll either jump ship or pull the victim card after a couple half heart months going at it.

“You jerk! Stop judging her! How do you know what she thinks?”

Because she told me.

I remember the day after I trained her daughter for the first time, I was working with the mom and I explained how much I was looking forward to working with her daughter and how much progress she would make because of her alacrity to finally get started. Before I could even finish the sentence her mom began to shake her head and frown then muttered, “She’s always going to look like that, that’s the way she was born!”

I quickly assured the mom that her daughter was very capable of making significant progress, especially at her young age despite the so called stubborn genetic “hand she had been dealt”.

All of a sudden a little whimper erupted into all out sobbing as she kept muttering in between gasps and sniffles that her daughter was destined to fit that mold her entire life. Her clay had been hardened, her dye had been cast and all she should be able to expect was a couple pounds off the scale at best.

It all began to make sense now. I wonder how many mom’s tried to quell their daughters hopes of a better body through fitness down with chains of doubt? Would she have been sporting a flawless body on the cover of the latest fitness rag? Maybe not, but with what her mom had indoctrinated into her, she’d most certainly never even get off the ground.

Two months later the daughter dropped out and 3 months later the mom pulled a Houdini. Some 8 years later I actually saw the daughter at a local fitness club, fresh out of college she was barely recognizable. Three inches and some 50 lbs later she was a clone of her mom, 20 years ahead of schedule.

Her mom was right, after all.

And that’s why you have these types of bulbous fitness minded women. They think because regular exercise is healthy that doubling the amount will have twice the benefit. So they bust their bottoms in jazzercise class but they never change and that’s the bottom line. 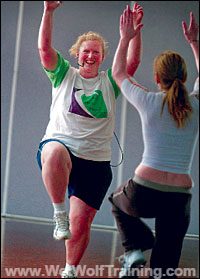 So they immediately chalk up their stagnant shape (which they never really believed would budge anyway) to their mom.

Sure, they’re doing a lot of things wrong, sure they’re putting junk in their mouth, sure they live off of bars and shakes and pimp supplement pyramid schemes instead of packing their meals but deep down in their forlorn hearts they truly believe they won’t ever change.

I have to wonder how many of these women were conditioned by their mom early in life to always being the “plump” girl and that they were destined to be a spittin’ image of their mom? It’s as if they almost relish repeating the obesity cycle of the family tree from one generation to the next. Like a self fulfilling prophesy they are carried along with no choice or control of their fate like dried leaves blowing in the wind.

Maybe that’s why they accepted the role of selling pyramid scheme supplements, bars and shakes and kept grinding away at fruitless workouts and classes. Maybe that’s why they never thought that maybe, just maybe they should take a look in the mirror. That maybe their diet really wasn’t working. That maybe all those classes and boot camps and circuit training classes weren’t really necessary after all.

Maybe just maybe they shouldn’t have listened to mom,

and maybe they really are doing everything wrong.

Because what they are doing isn’t working.

If you’re reading this, just know this.

It’s not too late. You can still claim the promises that lie ahead. But you’re going to have to stop doing things your way and start doing them the correct way.

Just Like Bonnie.
A 50-something granny, with type II diabetes, fibromyalgia who always thought she was destined to be “heavy-set” no matter how much she worked out. 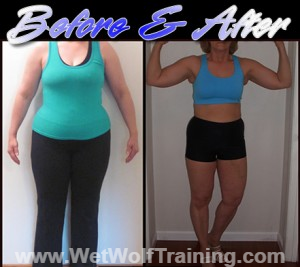 3 short workouts per week and plenty of healthy food!

She dropped every day aerobics classes, distance running, diet bars & shakes and put all her focus on food. She cut out 85% of her exercise and spent her time packing and eating her meals and in 1 year had lost a whole foot off her waist! by following her Customize OMEP program, click Here for Yours!.

All because she finally followed right map.

Or Treacy, who in her mid-30’s was tired of endless gym sessions and pills and gimmicky weight loss shakes decided to give real food customized based off her somatotype a chance and dropped 52 lbs of body fat in 12 months! 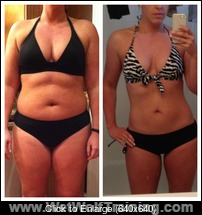 One Full Year of Focusing on food and Not Cardio and the gym.

She shattered the mold of being the “plump girl” and she did it by eating her omep and only going to the gym 4 days a week for less than an hour each training session.

I know you. I know your type.

And I’m not going to let you settle for anything other than your best!

No matter what your mom told you.