Notice: Only variables should be passed by reference in /home/wetwolf/public_html/wp-content/themes/gameplan/option-tree/ot-loader.php on line 326
 Chocolate Handcuffs - Wet Wolf Training

I am ashamed to admit it but I was watching MTV’s “I used to be fat” where cameras follow an obese adolescent around for 60 days and film their struggles eating almost healthy food, complaining during workout sessions and generally exemplifying a largely pessimistic attitude during the entire ordeal.

From watching a complete hour of the haphazard exercise routines and constant bickering back and forth between the sorry excuse of a trainer and the petulant little piglet I think I dropped about 10 I.Q. points.

However in the end tears are shed, hugs are passed out and only due to the severe de-conditioning of the plump youngster she was able to shed a modest amount of scale weight; taking her from a 183 pound pear shaped figure down to a 147 pear shaped figure.

The alarming trend with all the different slobs on the show is that they all really struggled with following their program; if you can even call it that. Only, this trend isn’t exclusive to chubby cheeked post high school grads who have no discipline. In fact this trend has become very common-place, in fact I have seen a few women first hand succumb to this trend.

It is a topic that very few women have the courage to discuss! In fact women tremble in fear at the mere thought of discussing this topic.

I’ve seen this pernicious phenomenon occur so many times that I coined a name for it.

These individuals are bound not by chains and shackles but rather by something that no key can unlock, and no saw can cut through.

We have all heard the phrase “Golden Handcuffs” used to describe a job that pays well but consumes your life or that you hate. Well I have coined a new term for females who can’t shake the compelling need to stuff their faces with sweet goodies and sugary treats. It’s called the “Chocolate handcuffs” and you will never find the key that unlocks them. 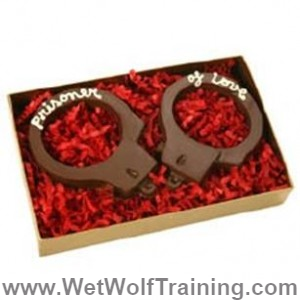 Why can’t I find the key that unlocks them? What’s the big deal?

I’ll tell you why you won’t find the key no matter how no matter how far you search, because you are searching in the wrong place.

First let’s discuss exactly what the “Chocolate handcuffs” refer to. As I mentioned above they are clasped tightly on females who are compelled to gobble up filthy sweets at every chance they get. Only they don’t eat the sugary little morsels because of any hunger or cravings.

“So sorry I fell off the face of the earth. In all honesty, I haven’t been on the program. I just kept slipping & slipping and slipped so far I was completely off. I wasn’t even hungry I would just eat for the sake of eating. I hope in the near future, when I have my head in the game.”

Why do you think you kept slipping off the program?

“I would have to say it’s because I couldn’t let go of my emotional attachment to food. I kept eating off plan when I was emotional, and used food for comfort. I would then punish myself for straying, only to end up eating more of the wrong choices…it was a vicious cycle. I really want to overcome this food issue I have. It is all consuming & I’m just tired of it.”

Here is an email I got from a client once.
“I just cooked ½ cup quinoa and it is so much food! Are you sure I’m supposed to be eating this much?”

This was a very confusing question as this young lady had no problem gobbling up a half dozen Girl Scout cookies over the course of the day. But this young sprite is not alone. This is a problem that affects women all across the globe of all ages.

Why is this you ask?

Simple, they believe that it is simply impossibly to eat a large volume of food, even if it is healthy, nutrient dense food and still burn fat and lose scale weight.

They also believe that in order to lose scale weight and burn off pesky fat they must be hungry if not starving. After all if you are hungry then that must mean that your body is burning through fat and you are well on your way to a size 3 outfit.

Nothing could be further from the truth!

Want to see a glaring red flag question that you are locked up with some chocolate handcuffs?

Here is a question someone emailed me last week.

Your first mistake is the fact that you are focused on losing scale weight as opposed to body fat. And what happens after two months that’s going to prevent you from making progress?

Will you give up on life?

Will you go on an ice cream sabbatical?

Will you forgo all healthy nutritious food thereafter?

Actually I already know the answer. I’ve seen it all too often. And the culprit is always the same. It’s arguably the most pernicious desire or emotion a person can possess who is about to embark on a journey of healthy, nutritious and abundant eating.

Dare you to take a stab at what group of the population struggles with this more than anyone?

If you said females who struggle with obesity then you win a jar of Hershey Kiss’s.

Ok, so you really wanna lose 20 pounds in 2 months?

Hell, while you’re at it why not just ask for a unicorn and a life time supply of back stage passes to Justin Beiber concerts!

Here’s how is starts; you swear to yourself you will never ever stray from your assigned diet again, you vow to never let a single scrap of unhealthy food enter your innocent pallet until you drop at least twenty pounds.

You start off with a burning passion, stick to all your assigned meals and after the first five days you have dropped three pounds of scale weight and your favorite pair of jeans are already fitting looser.

Then something unexpected happens.

On day six you gobble up 18 almonds instead of the assigned 10. You just blew it!

You convince yourself that you’re a looser destined to waddle around fat and unhappy the rest of your life. After all how can you possibly expect to ever achieve anything in life when the guilt of eight extra almonds is weighing on your mind?

A few days ago you were scared to eat that ½ cup of quinoa because it just looked like sooo much food! Only one thing can overcome that fear, and that’s the self disgust you feel for violating your diet by eating an excess of almonds!

So you throw in the towel, but tie on your bib.

Because you are about to tear through some sweet, satisfying goodies unlike anything ever before witnessed!

After all since you just proved to yourself that you are a loser by not sticking to your program you might as well go all out and remove any shadow of a doubt, right?

Before you can wipe your teary eyes and sniffling little nose of yours you have torn open that gallon of chocolate peanut butter fudge ice cream and have nearly devoured at least half the container.

Nauseas and dizzy from the influx of the sugar tidal wave you are determined to absolutely stuff your face beyond belief. After all if you punish yourself bad enough you’ll learn your lesson and will never ever touch this filthy junk again, right?

This strategy never worked in the past for you because obviously you didn’t push yourself to the limit; the punishment obviously wasn’t severe enough.

Now instead of seeking a sweet tooth fulfillment turns into a vicious all out sugar rush. You fly to the grocery store and snatch a box of cinnamon toast crunch and a quart of 2% milk.

Because you know full well that the whole milk will fill you up way too fast and you don’t want to miss out of a single bite of that delicious sugar laden cereal.

You grab a box of a dozen glazed doughnuts and fly home, stuffing your face with a doughnut at each red light.

By the time you get home you’re not even hungry anymore but it’s too late. You want to get some type of return on this emotional beat down you’ve already invested in. 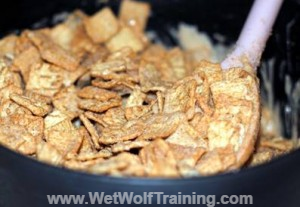 (This is your punishment for violating your diet!)

An hour later there is Cinnamon Toast Crunch pieces and crumbs flung all over the kitchen, flakes of glaze from the doughnuts covering your shirt and the corners of your mouth and you lay sprawled out over the kitchen floor.

In a comatose induced state the ceiling is spinning and you swear you will never stray from your program again, ever again.

You tell yourself that you will get right back on your program first thing tomorrow. But no, that would be too easy, you hate yourself and really want to punish yourself for being so weak minded.

In fact you vow to only eat veggies and chicken for the next two days and run for thirty minutes first thing in the morning hoped up on thermos to offset all the damage you inflicted on your fat cells.

And so the vicious cycle continues.

After all, it’s just another day in the life of wearing the chocolate handcuffs.