Notice: Only variables should be passed by reference in /home/wetwolf/public_html/wp-content/themes/gameplan/option-tree/ot-loader.php on line 326
 How To Beat the Binge - Wet Wolf Training

How To Beat the Binge

I was at Greenwise grocery store last night and in the checkout line ahead of me was a typical wanna be fitness girl. In her mid-20’s, clad in lululemon attire, trying her hardest to look the part despite her fluffy figure. Her cart was full of the usual “healthy” foods misguided newbies love to buy: yogurt cups, diet soda, string cheese, low-carb tortilla wraps, a box of protein bars and a box of fresh baked brownies from the bakery.

“Price check on the brownies” said the cashier before she sauntered back to the bakery to fetch the price. I was so furious I had to bite my tongue not to say anything to this little twerp!

But not because of the extra wait.

Then she looked over at me and said “I’m so sorry for the delay.”

The wait isn’t a problem I said, but you have no business eating those brownies. Stunned at my remark, she bolted out the door like a scalded cat.

And she knew I was right!

“You bully! How dare you tell her she shouldn’t eat junk food!?!?”

How dare I not?

You see, there are usually two different routes a devoted dieter will follow.

First they will adopt an “open borders” policy when it comes to their diet because they fear that they will turn into a sugar crazed lunatic faster than Dr.Jekyll can turn into Mr.Hyde if they don’t satisfy their sweet tooth cravings the instant one arrives.

I heard a woman gripe just last week. “I’m addicted to sweets hehe! If I could just have a red velvet cupcake right now my cravings would go away!”

And this brings us to Fat Loss Life Principle # 17 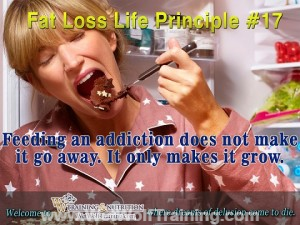 Feeding an addiction doesn’t make it go away. It only makes it grow.

And it never ends at one cupcake but it always starts with only one bite.

You see, if you eat enough healthy nutritious food in the first place you won’t have any desire to eat sugar sweets, at least not a physical desire to.

“You’re so wrong! Anytime you ban a food it will only make you want it more!”

You know what; you just gave me a great idea.

Next time you’re at the super market I’m going to poke my head around the aisle you’re on and holler out “You can’t eat pickles!” then I’ll watch as you drop your basket of Lucky Charms and jasmine rice, break out in writhing convulsions like a heroin addict going through withdrawal symptoms and then bolt to the nearest jar of pickles, smash it on the floor and stuff your greedy little cheeks like a squirrel hoarding it’s last meal for the winter.

The next thing you’re probably going to tell me is that eating ice cream post workout magically turns healthy.

Besides, your program shouldn’t ever list the foods you aren’t supposed to eat but rather only the foods and amounts to eat. There are millions of foods in the world that won’t be on your program and you shouldn’t be thinking about any of them. And the funny thing is that you won’t want them either, once your grumbling belly is stuffed with healthy, fats, carbs and proteins and you’ve licked your Tupperware clean.

Look here, your focus & your thoughts should be only on the heaping helping of healthy food that you’re about to shovel down during your next meal. Stuff that’s not on your program shouldn’t even be a part of your thought process, and won’t be, provided you finished your last meal.

Which brings me to Fat Loss Life Principle #3

“Bu bu but knowing that no foods are off-limits will prevent you from ever feeling the urge to binge, and you’ll be able to much more easily exercise portion control.”

Take those marshmallows out of your ears junior and listen good. The urge to binge doesn’t come from not eating garbage. Eating garbage is what triggers a binge!

The urge to dive into a jail break binge also comes from being emotionally unfulfilled in other areas of your pitiful life or from being deficient in macro & micro-nutrients, which is up next on deck.

Tell an emotional eater who is void & unfulfilled in other areas of her life that she has to stop at only one scoop of chocolate mint ice cream and she will devour the entire gallon before you can say flexible dieting.

The good news is that eating enough of the right healthy foods will prevent the physical urge to binge. And if you’re still compelled to explode into a jail break binge on cookies and cupcake then it’s an emotional issue not a nutritional one.

In other words, a kit kat bar isn’t the solution, a shrink is.

Your response to hunger and cravings is your responsibility.

“Bu bu but! It’s better than eating clean all the time!”

Which brings us to the next route overzealous dieters love to travel.

They love to brand themselves as clean eaters and expunge all sweets and fried foods from their plates.

They will try to be too perfect and not allow a speck of impurities past their lips outside of their precious guarded “re-feed” meal. Oh and except of course for their evening glass of wine to help them unwind from a hectic day of boot camp class, running errands & picking up car pool.

Only it’s nowhere near perfect. It’s severely deficient in every area and leaves them with rock bottom blood sugar levels and craving anything in sight. Anytime I ask an antsy newbie to write out the exact foods and amounts she eats per meal each day I can always be assured to see two common pitfalls from the clean eating crowd:

1) Super low carbs and fats or

And always overloaded with protein.

Since fats are the most kcal dense macro, dropping them to rock bottom levels is gonna take a monster size bite out of your total kcal intake. We all know how that will unfold.

Every Friday night it happens.

After a full of week eating way below their calorie baseline they’ve dug a caloric deficit as deep as the Grand Canyon and all the will power and motivation fitness memes on all of Instagram can’t stop the avalanche of sugary carbs she’s about to cave in to.

I knew a woman 3 years ago who ate a scheduled cheat meal every Saturday morning. She would perform an hour of body part split training every morning followed by an hour of steady state cardio six days a week. So when her weekly junk food ritual rolled around her anticipation had worked its self to a fevered pitch. It started with an overflowing bowl of granola then came the chocolate chunks then she added a couple bagels slathered in low fat cream cheese. With every passing week the “re-feed” meal grew larger and larger until she devoted an entire day to stuffing her face with as much garbage as she could.

And you know what happened next?

She trimmed her diet down more and more each week and added more and more cardio to her workouts, which led to steadily growing binges disguised as re-feed meals.

And so the vicious cycle continues.

It doesn’t matter if you try to squeeze in palm sized portions or filthy sweets to fit your daily macros or if you try to sneak in your sugar addiction disguised as a re-feed meal; for the habitual dieter, both roads lead to the same destination in the end.

A gut buster binge with the woman curled up in the fetal position on the floor.

Moaning and groaning in agony not so much from the deep down sickening feeling from her belly busting at the seams but saturated in the utter disgust she feels towards herself for losing control again.

But the second time this week.

If you measured her self-esteem right now it wouldn’t even reach a toadstool.

Seriously, if you can’t even stick to an eating program full of healthy food for an entire week without slipping on a Hershey Kiss wrapper and falling face first into a bowl of Chex Mix, then how in the world are you going to graduate from nursing school?

Show up to work on time?

Or raise a child?

I’ll tell you how.

But it won’t make any sense until you understand this key point:

You might have made the honor roll back in school but if I was passing out report cards on what you ate you’d be a flunky. You’re like the kid who never turned in his homework and skipped class and still can’t figure out why he failed.

Well I’m holding you back, not just one grade; oh no I’m sending you all the way back to Kindergarten. Because your eating is below curriculum standards.

Look lady, if there’s one thing you gotta have in the fat loss game its perseverance. You’re going to have to fight battles every day of your life until the day you die and maybe even on that day too. Battles with your self-control, confidence & discipline all of which are qualities you’re woefully lacking when it comes to what you put into your mouth.

Now if you were paying attention this long you’ll know that the #1 way to prevent your jail break binge is to eat the right foods in the right amounts at the right times during the day. After all if you’re not hungry with a belly full of nutritious food it’s gonna be pretty tough to gobble up more sweets.

“Okay I get it but why can’t these women control what they put into their mouth?”

You just asked me the easiest question I’ve been asked since your last binge, which brings us full circle to 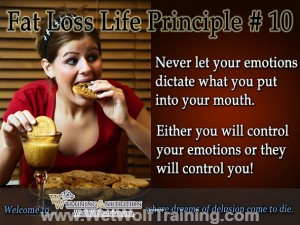 Never let your emotions dictate what you put into your mouth.

What if you’re eating enough of the right amounts of the right food but still have the compelling urge to eat Oreo’s and Doritos every evening? Not from hunger but from something else deep inside. Not from an empty belly but from an emotional void.

If this sounds like you then you’re not alone. If you’re compelled to eat garbage even when you’re not hungry then food isn’t the problem.

You need to see a therapist.

Because right now they have you in a strangle hold, controlling every bite you take.

About the Author:
Jeff Kuh is a former full scholarship collegiate football player and strength coach, private sector personal trainer turned published writer, webinar presenter and whistle blower who specializes in fat loss nutritional program design. He is currently the purveyor of your Next Meal!